A Call For Geoconservation in the Democratic Republic of Congo 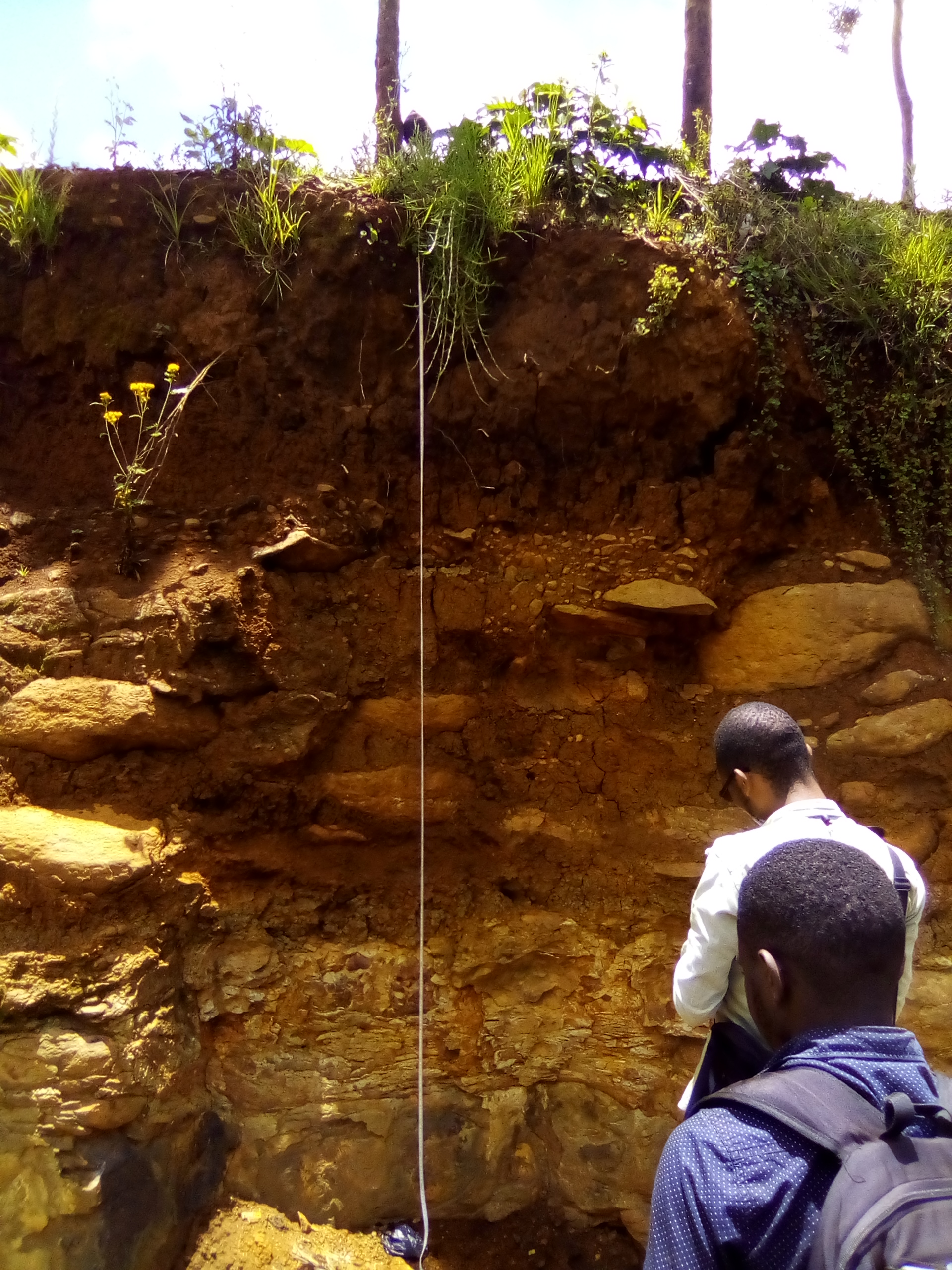 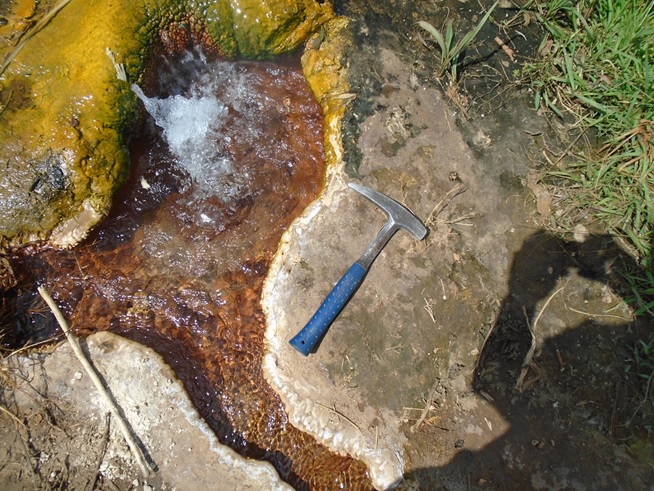 Young geologists inventory a geoheritage site in the Kivu region of the Democratic Republic of Congo.

However, to date the DRC has no Geopark (a unified area that advances the protection and use of geological heritage in a sustainable way, and promotes the economic well-being of the people who live there). Yet, geology is part of the planet’s “natural capital,” the world’s stock of natural assets. These assets provide many benefits to society, often referred to as “ecosystem services.” Traditionally, these have focused primarily on biotic services and have undervalued abiotic or “geosystem services.” These “geosystem services” are derived from the geodiversity of the planet. Among these services are regulating services, supporting services, cultural services, provisioning services and knowledge services that underline the importance of geology in providing evidence of the evolution of the planet and its living systems. Hence the importance of geodiversity conservation.

The geological heritage of the Kivu region (D.R. Congo) includes geological features, landscapes and landforms that are characteristic of the region. Most of these structures were developed through geological processes that lasted several million years and are non-renewable. Moreover, this heritage is essential from (1) a scientific and educational point of view since it constitutes natural laboratories for the study of the phenomena that have shaped our globe; (2) from an economic point of view, since many of the resources we use come from this heritage and it can be valorized in the field of geotourism, and (3) from a cultural and aesthetic point of view.

This heritage can help us understand the processes that led to its creation. It is therefore essential that this geological heritage be preserved for future generations. Furthermore, there is a link between biodiversity and geodiversity because of the interaction between the geosphere, hydrosphere, atmosphere and biosphere. Geoheritage is the foundation on which living beings evolve. It can inform us about the evolution of life through the fossils it contains. Some geosites of the Kivu region contain an exceptional biodiversity in terms of fauna and flora. This is the case of the Virunga and Kahuzi-Biega mountain massifs, which constitute habitats for certain threatened species such as the mountain gorilla. 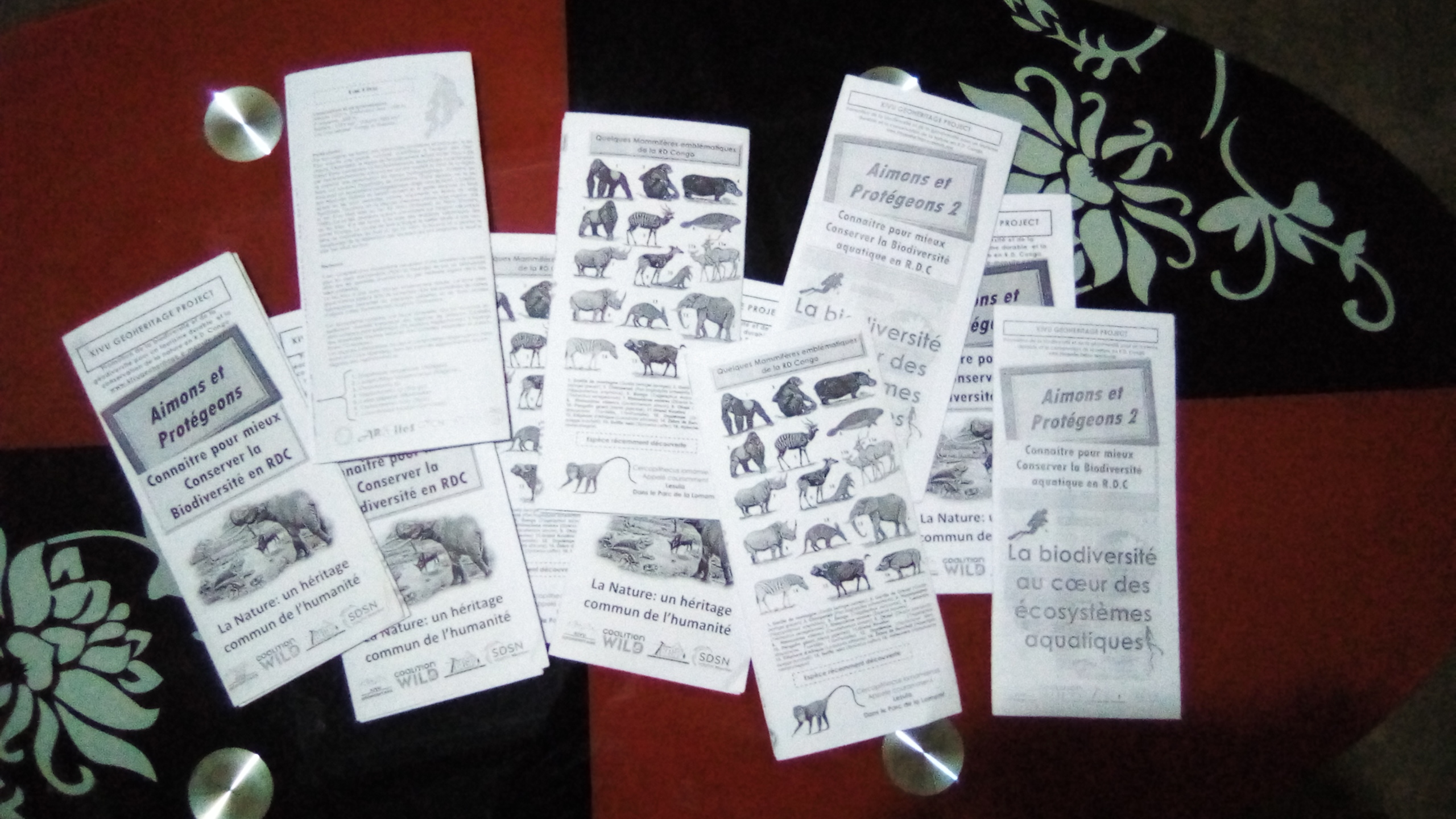 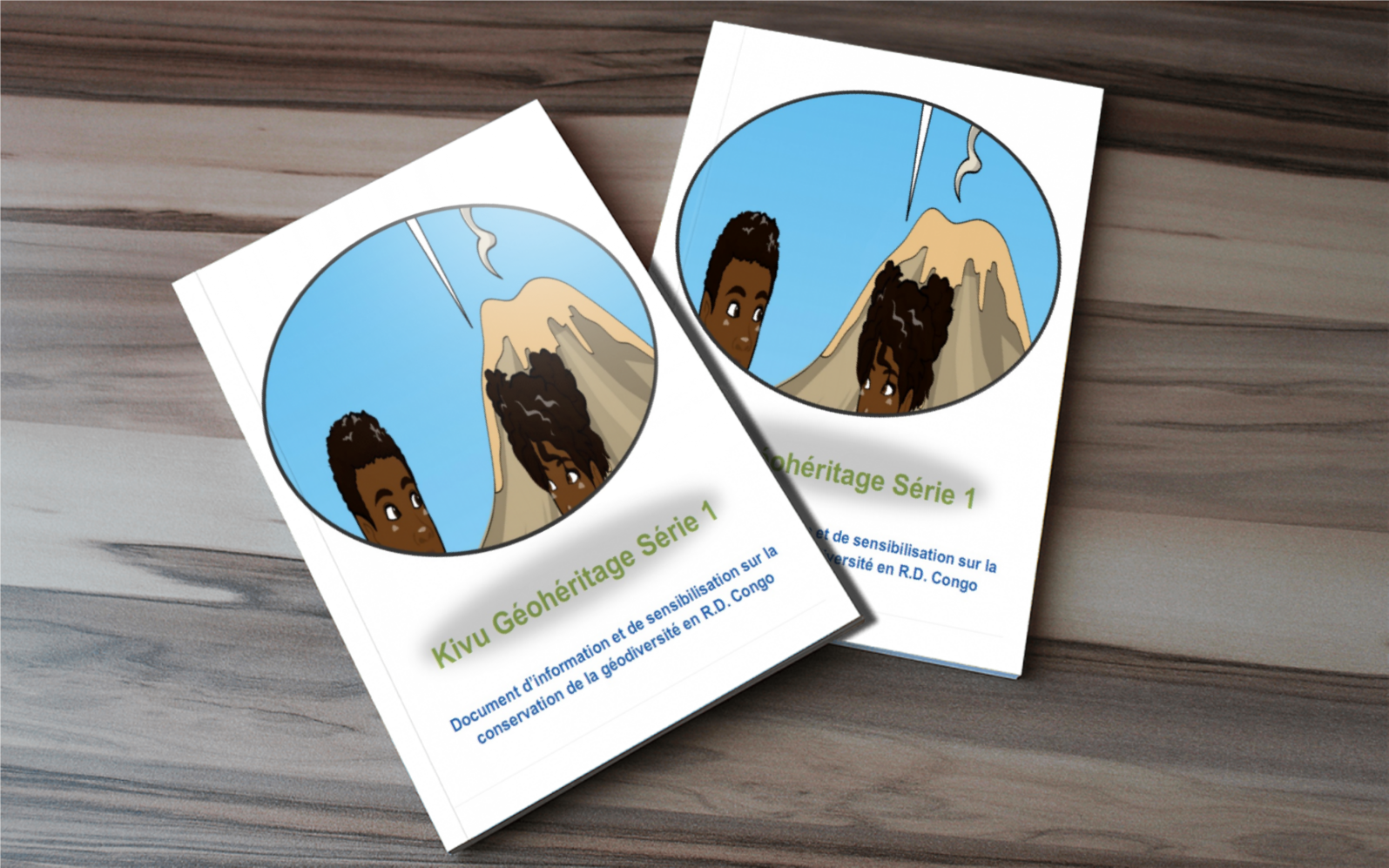 Flyers produced in the framework of the Kivu Geoheritage Project

The Kivu region is part of the Albertine Rift where 41 species of birds are endemic. This region includes a set of so-called collapse ditch lakes. These lakes are a legacy associated with the rifting in this region. These include Lake Kivu and Lake Tanganyika, which is the second deepest lake in the world after Lake Baikal. These lakes are rich in fishery resources and have an exceptional biodiversity.  As such, Lake Kivu and Lake Edward are part of the Lake Victoria ecoregion, with endemic genera of Cichlidae, Clariidae and Poeciliidae. Lake Tanganyika is part of the Lake Tanganyika aquatic ecoregion with 22 endemic genera of Cichlidae and 8 endemic genera in Clariidae, Claroteidae, Clupeidae, Cyprinidae and Poeciliidae.

In the Kivu region, some geological sites of tourist and educational importance are threatened by anthropic activities. This is the case for Mount Goma (North Kivu), which is threatened by anarchic construction. The exploitation of construction materials can also lead to the deterioration of the volcanic reliefs in this region. For example, the illegal exploitation of construction materials at the Lac Vert (North Kivu) site creates a permanent threat to this geotouristic site. Therefore, it is the duty of the local communities to appropriate their geological heritage by protecting and promoting it and, in so doing, to derive a sustainable economic benefit from it. However, at present, few efforts are being made for the conservation and promotion of geodiversity compared to biodiversity in the Kivu region (Democratic Republic of Congo) even though the geology of Kivu contains a large part of the Earth’s history from the Precambrian era to the present. This region is particularly known for its mineral resources and people are amazed by the beauty and natural complexity of the phenomena that take place in this region: from active volcanism to hydrothermalism, gas emanations, metamorphism, brittle and ductile deformation, alteration, etc. 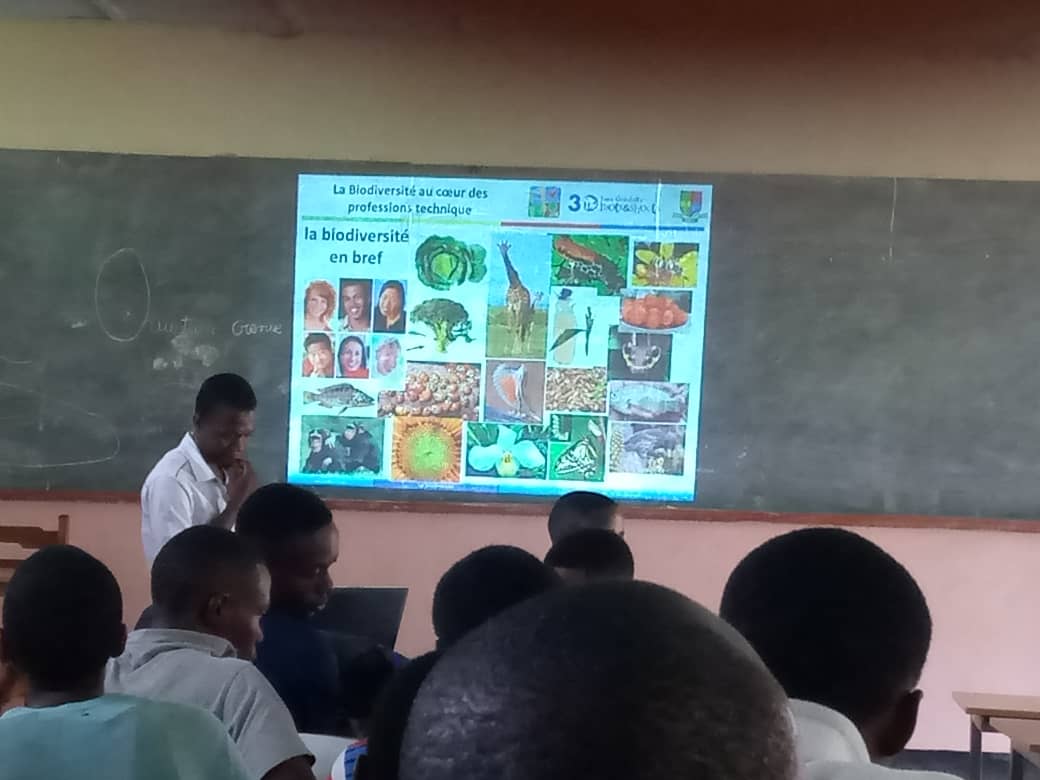 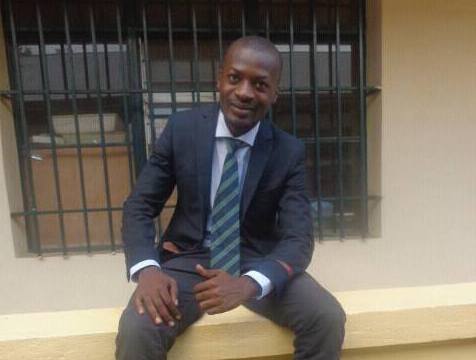 Jean NACISHALI is a Congolese (DRC) who is passionate about nature conservation and environmental protection. Since his early age he was fascinated about the exceptional biodiversity and the geodiversity of D.R. Congo. This passion led him to pursue his graduate studies in Geology at the Official University of Bukavu and a post graduate study in Biodiversity and Sustainable Forest Management (orientation: Forest and Environment) at the University of Kisangani. He is committed to implementing projects that contribute to the sustainability of environment and socio-economic development of community without compromising the protection of natural resources. Thus, he co-founded the BEGE-RDC, an SDSN-Youth member organization, to promote the sustainable management of natural resources and to tackle environmental challenges in DRC. He is also a junior lecture in Geology and a Global Schools Advocate at the Global Schools Program of SDSN-Youth toward the implementation of the education for sustainable development in schools setting.

Invest in youth like Jean who have a vision for a better planet.