Feet on the ground, head in the stars

2019 was a remarkable year for the youth to be seen, heard, conquering prestigious spaces that the oldest generations used to occupy on the global scene. The Swedish teen activist Greta Thunberg started the Fridays for Future movement, being followed by thousands of other teenagers in her School Strike for Climate. Her moral fibre, bravery in pointing fingers and commitment to a wider collective reality that business as usual tries to cover, had shed a light on the kind of impact humans are having on the planet by the lifestyle consolidated in the West. This raised strong emotions from different social sectors.

Hearing Greta speak for the first time helped me to decide to not take a PhD. I was considering this possibility as it is difficult to make a living as an independent water researcher outside of academia, but in Greta’s words I found strength to stop studying and start taking action. My first concern regarding Youth School Strikes was whether it would last or if frustration in these fresh minds might dishearten many of the young people with huge potential. What I felt called to do was to get in touch with the local group here in the Portuguese Algarve and offer them a gift.

I asked myself, “What do they need to learn that school doesn’t teach?” and my mind became flooded with ideas. I was coming from a very special experience of studying a Master of Science degree at a sustainable community of learning in Southwest England called Schumacher College, so I remembered those friends working in holistic methods: Permaculture, Biomimicry, Design Thinking, amongst others. I invited my friends to share their topics of passion for young people in south Portugal as a first experience. After recently moving to Faro, Portugal, I began making some new friends who I soon invited to the effort.

My biggest and initial challenge was to find a place to run the programme and gaining trust from Portuguese teachers and students. I spent weeks visiting schools, trying to make appointments with teachers to present the programme, pitching my idea to various people, and asking for their support to spread out the word to their students. With schools already having minimal extra time, and students being filled with homework, tasks, and extra classes, I could understand why having one more activity (that didn’t raise their grade) was very difficult to add.

But then I found André, a science teacher committed to making every lesson for his students somehow about sustainability, including having an eco-schools programme. This opened up an enormous door for my initiative!

After negotiating time with Pinheiro e Rosa Secondary School, I designed 8 different sessions of 2 hours each and scheduled them from November to December 2019. Nine different learning facilitators from three different countries accepted the invitation, five organisations supported the initiative, while 11 students from two schools joined. We used André’s school as our base, and I felt very nervous while preparing the sessions.

I brought ecological cases and videos to be discussed in Complexity Theory, as well as games to warm up and include our bodies in the learning. We sat in a circle and talked about how indigenous peoples have been doing this for millennia and why. In one of our lessons, the students learned about Design Thinking, Design for Healing and Biomimicry from a teacher on the other side of the ocean.

We learned about plastics in the ocean, touched samples of compostable packaging, saw a lamp made with reused ordinary plastic folders and used CDs, and reflected on what we can do today to depend less on plastic material. The group also learned from a local water expert on the importance of the health of water flow in local streams. At the end, we reviewed all our topics via playing a game, talked about Ikigai or “our reason for being”, and reflected and listened to an elder explain what, in his opinion, makes education transformative.

I learned and taught at the same time, with my students. I believe that this exchange is only possible without hierarchy, and when you hold a safe space where vulnerability is allowed and a place where plans change according to people’s needs. This is why I have named this project a Learning Journey for Water and Climate in the Algarve (in Portuguese, Jornada de Aprendizagem em Água e Clima no Algarve).

I learned a lot about myself, and how I feel while working with others. The prototype happened quickly, but now I will keep diving deeper into what I consider to be activism that gives us the energy to participate, to serve, to learn, and to create. With friends from Instituto Nhandecy in the south of Brazil, we are designing an experience for Portuguese and Brazilian young leaders that are already running projects or want to start them. We will do this together, without teachers and without students, keeping our feet on the ground and our head in the stars. 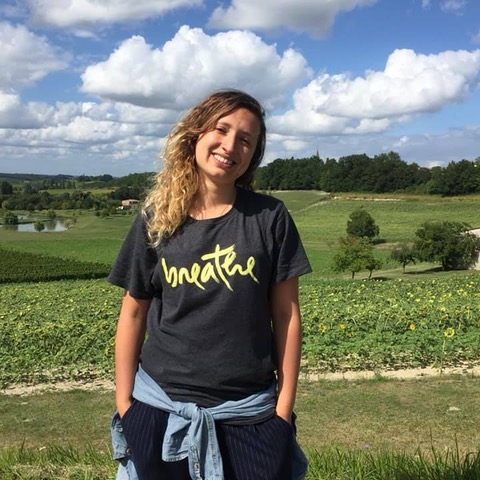 Rafaela sees herself as a 21st century biologist in the edge of science, arts and technology. From Curitiba, Brazil, she graduated in Biology at Federal University of Paraná, with a period of studies in Evolution at University of Münster, Germany. She concluded her MSc in Holistic Science at Schumacher College, with a special interest in climate change narratives and started exploring them through what is being called ‘a new water paradigm’. Her interests include biomimicry, non-violence, delicate activism and multidisciplinary projects that engage head, heart and hands. In Brazil, she is associated to Instituto Nhandecy. Rafaela is a 2019 CoalitionWILD Ambassador.

Invest in youth like Rafaela who have a vision for a better planet.